Your browser is out of date!

Kerala is a state on the southwestern Malabar Coast of India. It was formed on 1 November 1956, following passage of the States Reorganisation Act, by combining Malayalam-speaking regions. Spread over 38,863 km2 (15,005 sq mi), Kerala is the twenty-second largest Indian state by area. It is bordered by Karnataka to the north and northeast, Tamil Nadu to the east and south, and the Lakshadweep Sea[12] to the west. With 33,387,677 inhabitants as per the 2011 Census, Kerala is the thirteenth-largest Indian state by population. It is divided into 14 districts with the capital being Thiruvananthapuram. Malayalam is the most widely spoken language and is also the official language of the state.

The Chera Dynasty was the first prominent kingdom based in Kerala. The Ay kingdom in the deep south and the Ezhimala kingdom in the north formed the other kingdoms in the early years of the Common Era (CE or AD). The region had been a prominent spice exporter since 3000 BCE. The region's prominence in trade was noted in the works of Pliny as well as the Periplus around 100 CE. In the 15th century, the spice trade attracted Portuguese traders to Kerala, and paved the way for European colonisation of India. At the time of Indian independence movement in the early 20th century, there were two major princely states in Kerala-Travancore State and the Kingdom of Cochin. They united to form the state of Thiru-Kochi in 1949. The Malabar region, in the northern part of Kerala, had been a part of the Madras province of British India, which later became a part of the Madras State post-independence. After the States Reorganisation Act, 1956, the modern-day state of Kerala was formed by merging the Malabar district of Madras State (excluding Gudalur taluk of Nilgiris district, Topslip, the Attappadi Forest east of Anakatti), the state of Thiru-Kochi (excluding four southern taluks of Kanyakumari district, Shenkottai and Tenkasi taluks), and the taluk of Kasaragod (now Kasaragod District) in South Canara (Tulunad) which was a part of Madras State. 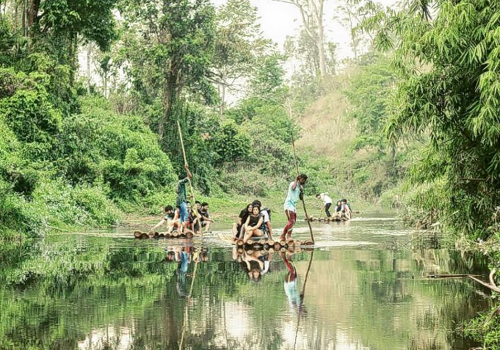 A substantial portion of Kerala may have been under the sea in ancient times. Marine fossils have been found in an area near Changanacherry, thus supporting the hypothesis.[36] Pre-historical archaeological findings include dolmens of the Neolithic era in the Marayur area of the Idukki district. They are locally known as "muniyara", derived from muni (hermit or sage) and ara (dolmen).[37] Rock engravings in the Edakkal Caves, in Wayanad date back to the Neolithic era around 6000 BCE.[38][39] Archaeological studies have identified Mesolithic, Neolithic and Megalithic sites in Kerala.[40] The studies point to the development of ancient Kerala society and its culture beginning from the Paleolithic Age, through the Mesolithic, Neolithic and Megalithic Ages.[41] Foreign cultural contacts have assisted this cultural formation;[42] historians suggest a possible relationship with Indus Valley Civilization during the late Bronze Age and early Iron Age

Kerala has been a major spice exporter since 3000 BCE, according to Sumerian records and it is still referred to as the "Garden of Spices" or as the "Spice Garden of India".[44][45]:79 Kerala's spices attracted ancient Babylonians, Assyrians and Egyptians to the Malabar Coast in the 3rd and 2nd millennia BCE. Phoenicians established trade with Kerala during this period.[46] The Land of Keralaputra was one of the four independent kingdoms in southern India during Ashoka's time, the others being Chola, Pandya, and Satiyaputra.[47] Scholars hold that Keralaputra is an alternate name of the Cheras, the first dominant dynasty based in Kerala.[48][49] These territories once shared a common language and culture, within an area known as Tamilakam.[50] Along with the Ay kingdom in the south and the Ezhimala kingdom in the north, the Cheras formed the ruling kingdoms of Kerala in the early years of the Common Era (CE).[51] It is noted in Sangam literature that the Chera king Uthiyan Cheralathan ruled most of modern Kerala from his capital in Kuttanad,[52][53] and controlled the port of Muziris, but its southern tip was in the kingdom of Pandyas,[54] which had a trading port sometimes identified in ancient Western sources as Nelcynda (or Neacyndi) in Quilon.[55] The lesser known Ays and Mushikas kingdoms lay to the south and north of the Chera regions respectively.

In the last centuries BCE the coast became important to the Greeks and Romans for its spices, especially black pepper. The Cheras had trading links with China, West Asia, Egypt, Greece, and the Roman Empire.[58] In foreign-trade circles the region was known as Male or Malabar.[59] Muziris, Berkarai, and Nelcynda were among the principal ports at that time.[60] The value of Rome's annual trade with the region was estimated at around 50,000,000 sesterces;